Because Inspiration Should Cost Nothing

The Asian Wedding Directory is not just for the Bride or Groom looking for easy access to the best suppliers or service providers from the Asian Wedding industry. It is a one stop shop for everyone’s needs no matter how large or small; so, whether you are the lucky person getting married, the family member looking for that special something to make their big day that little bit more extraordinary, or the wedding guest who needs advice on attending their best friend’s wedding, the Asian Wedding Directory has it all.

From the vast wedding rituals of the various faiths each having their own distinct character, which make up the many different communities and cultures we live and work alongside on a daily basis, to the small family run businesses producing bespoke pieces tailor made to suite every individual taste, it is with great pleasure that we commend the Asian Wedding Directory to you.

A lot more businesses are under ever increasing pressure to take on more and more in this day and age and the end result is often poor. The Asian Wedding Directory will alleviate the pressures of advertising and distributing your companies’ details both nationally and eventually internationally, so you can have peace of mind and rest assured that a dedicated and experienced team is constantly behind your brand and working in harmony with yourselves to maximise your sales and therefore increasing your profits.

The Asian Wedding Directory believes first and foremost in giving world class customer satisfaction. It is not an impossible mission statement when you have been in and around the industry for over 13 years. From a humble printed publication to amazing wedding exhibitions and now a brand-new on-line portal we are forever thinking out of the box to bring you the best we can.

Our dedicated team has a solid background in advertising sales, on and off-line print media, and events. This quite simply means that you will be in experienced hands and our success will mirror your successes and profits. We are here to help in any way we can, the advertisers get the best deal from us and the most out of one simple transaction, the end user gets our full commitment to make sure the service providers are coherent and sympathetic towards their needs.

The Asian wedding directory team will alleviate the pressures of advertising and distributing your companies branding both nationally and internationally with our online presence so that you the brand ambassadors of your companies have complete peace of mind and can be rest assured that a dedicated and experienced team is constantly behind you every step of the way to maximise your sales and therefore overall increasing your return on investment.

Who do we appeal to? 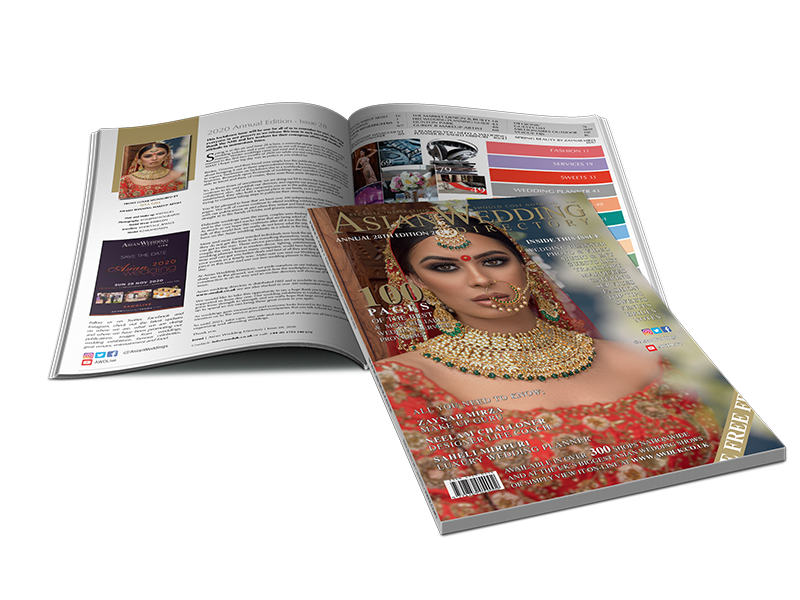 The Asian Wedding Directory is for the style conscious and open-minded individual who is on the social scene is social media savvy, but still likes the feel of a quality publication with a straight to the point attitude and possesses a certain pride in their Asian Heritage without forgetting his or her western values. From this perspective our listing also reflects 21st century culture where East meets West. Everyone planning a wedding will benefit from our directory on or off-line.

The ability to afford a lavish wedding venue or an a‘la carte caterer may not be in everyone’s reach so our aim is to target people from all genres and every budget, our target market ages range from 18-55. We estimate that with 36,000 copies in circulation an average of 5 people will read or be shown the directory, which has now opened up a potential market of 180,000 consumers, and we haven’t even included the Internet in those statistics.

The parents of such individuals love our publication, they are still some of the biggest decision makers during the planning and or castration of an Asian wedding in an average household we normally see a pick up several copies for their son or daughter, the in-laws and also for themselves.

We estimate that in the 13 years that the publication has now been printing for several million people have read it and it has helped thousands plan one of the biggest, most important and expensive days of their life.

The directory is distributed nationally through our network of stockists and advertisers. It is available to pick up in all good shops, especially those that provide products or services to the wedding sector as well as at some of the UK’s major Asian wedding shows. we annually organise our very own Asian wedding shows in London and the midlands where the publication distribution is one of our key objectives. As well as these stores we place many copies in waiting areas of the following businesses; barbershops, hairdressers, beauty salons, nail bars, well-being and holistic outlets and some bars and restaurants also.

The Asian Wedding Directory is FREE to pick up from anywhere that stocks it whilst stocks last. We can however post you out your very own copy, please go to our contacts page for more information.

As a backup to this, everything that is in the FREE directory is available to be viewed online on this website completely FREE.

The story so far… 28 issues strong